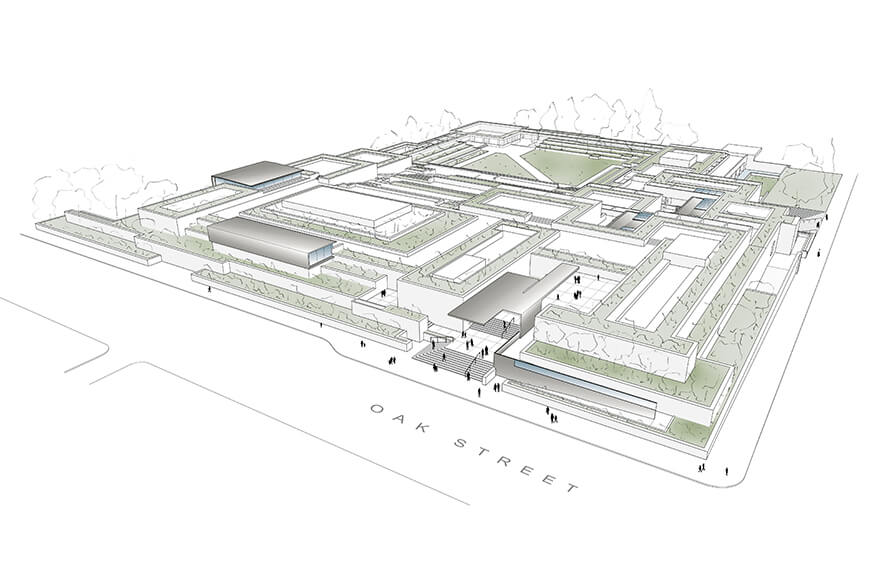 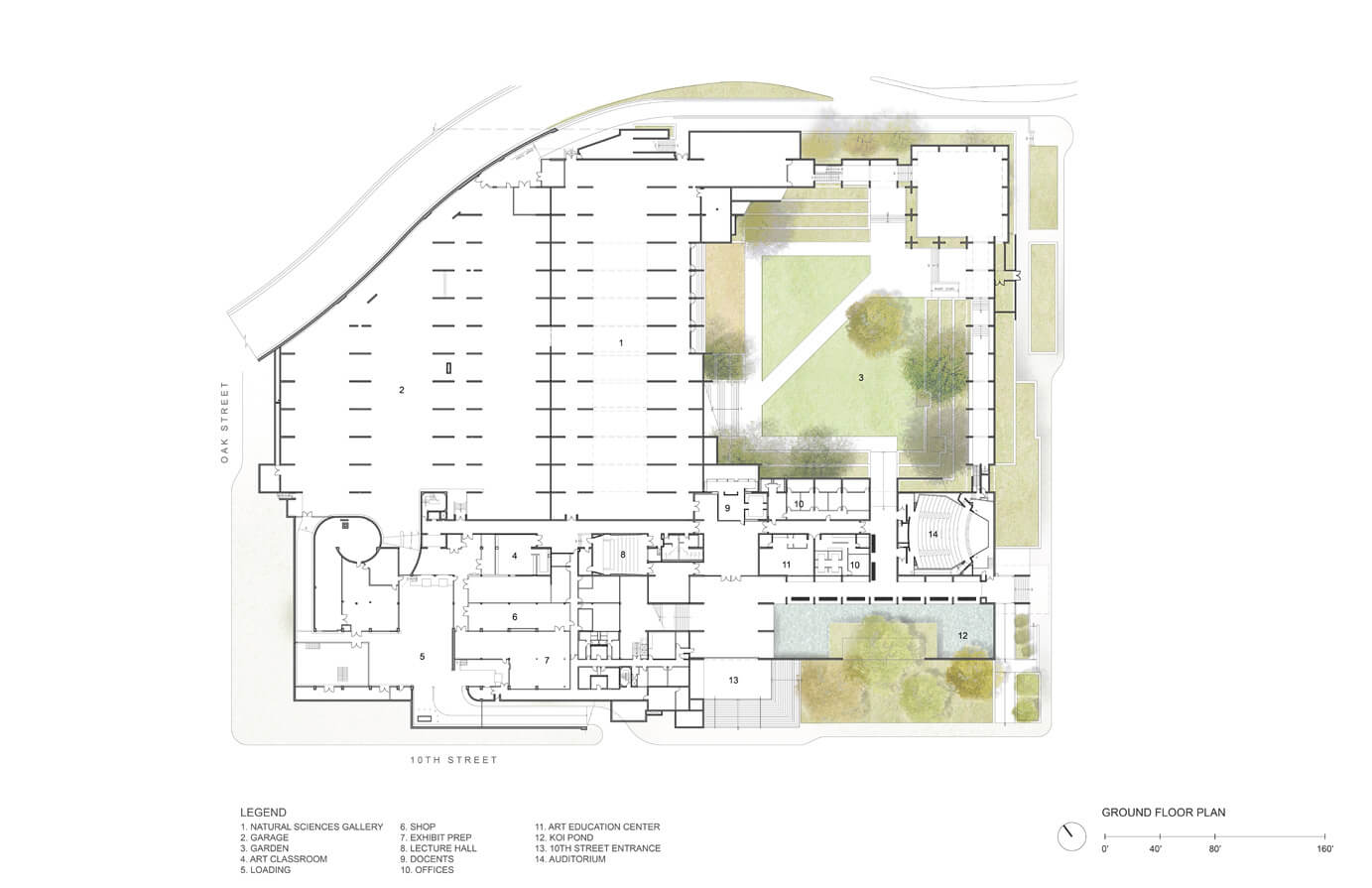 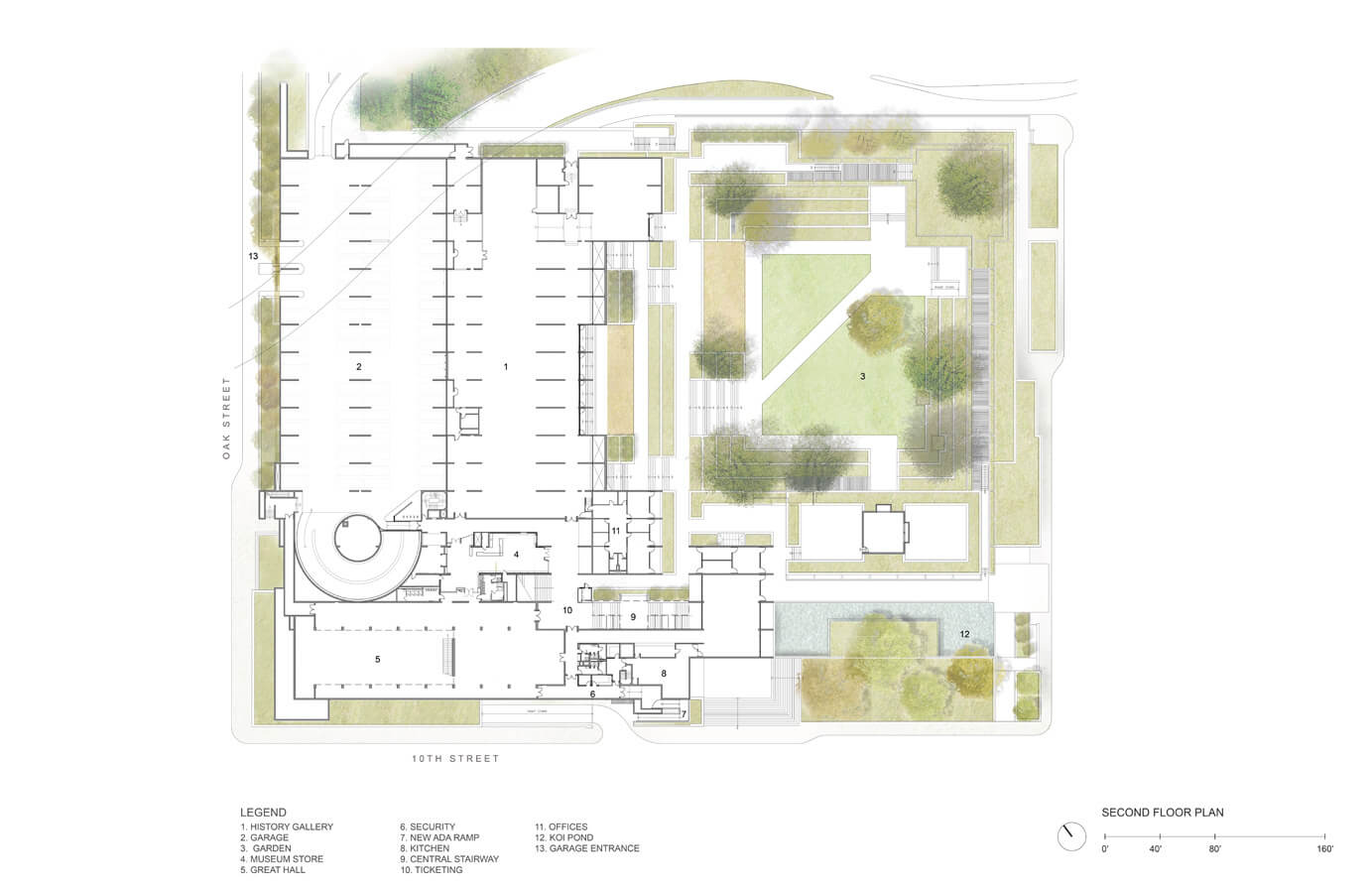 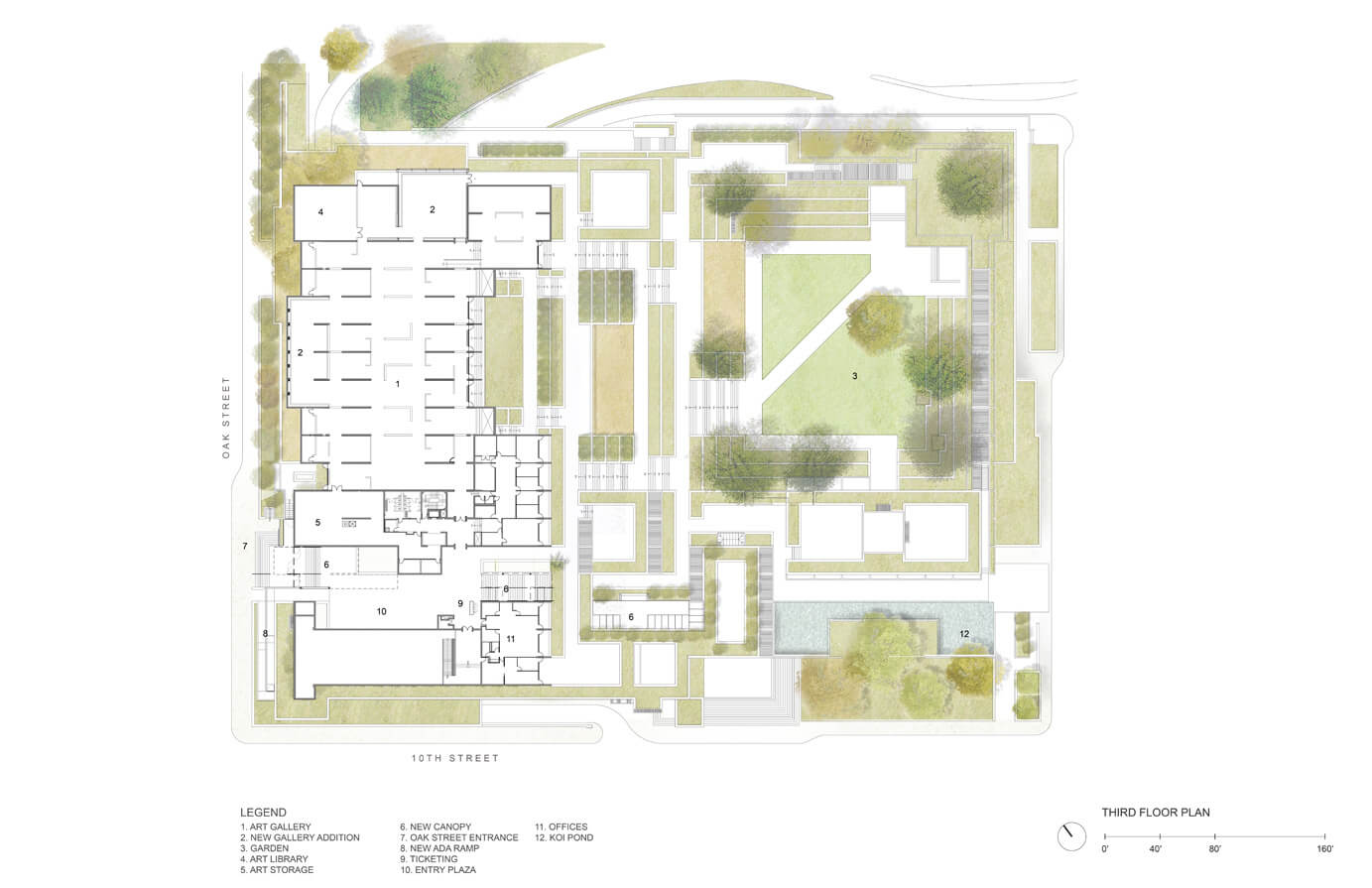 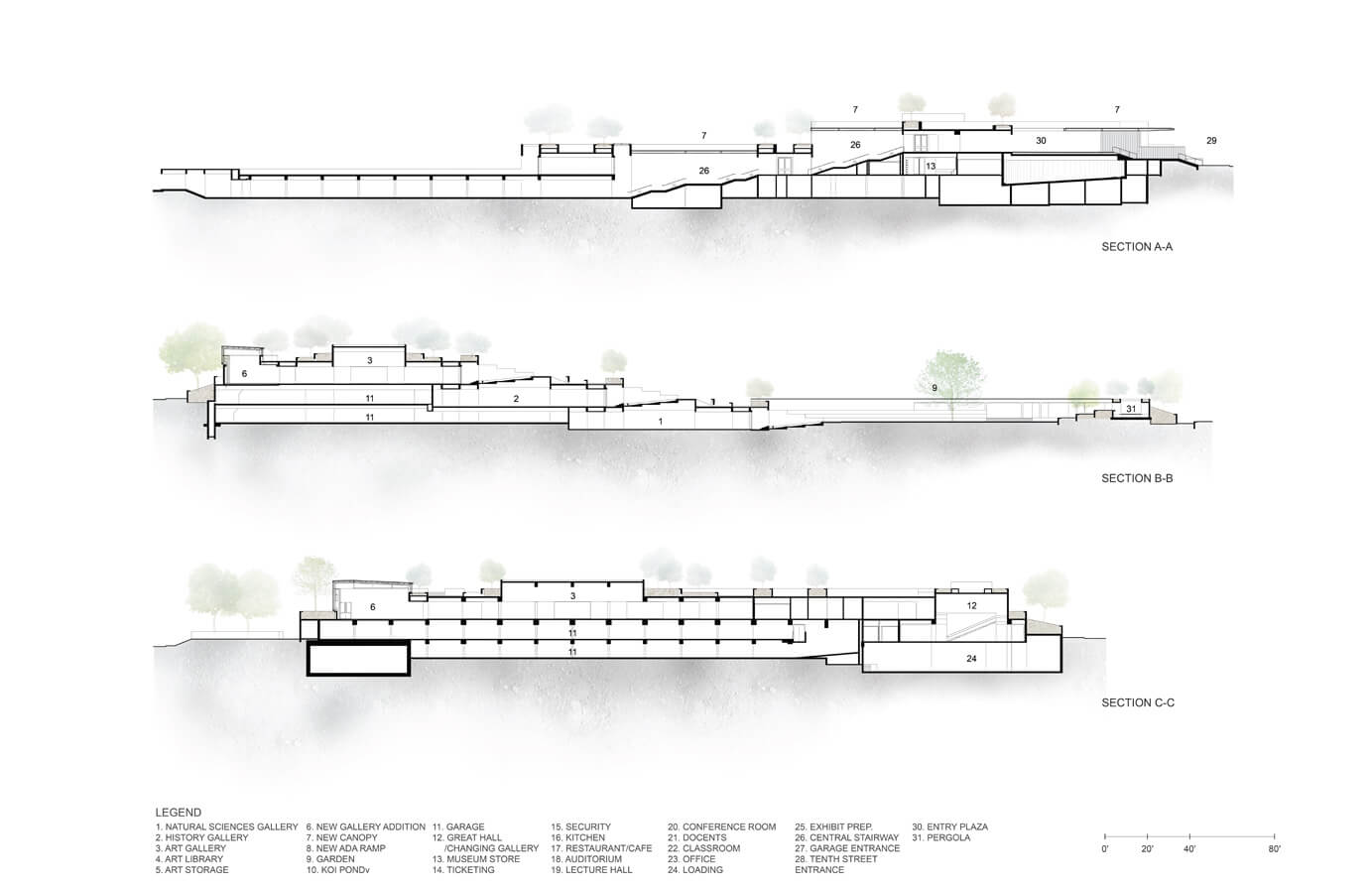 The Oakland Museum of California (OMCA) turns 50 years old in 2019. The landmark Brutalist museum building by Kevin Roche, John Dinkeloo and Associates is inwardly focused; the walls surrounding the galleries and lushly terraced garden offer few opportunities to enter within.  By contrast, the "museum for the people” has always been a community-focused organization with a core mission to be inclusive and relevant to the people of Oakland and California. An upcoming renovation (funded by an $85 million capital campaign) is focused on strengthening OMCA’s commitment as a neighborhood and community gathering space.

A 2010 renovation by Mark Cavagnero Associates updated and expanded the galleries to bring a greater sense of entry that reaches out to Oak Street to welcome visitors inside. The popularity of OMCA's Friday Night events created an energy around 10th Street that the museum hopes to build upon with the current renovation plans that include a new 40’ long window directly above the 10th Street entry to provide greater visibility and access from the café to the increasingly vibrant street life outside. A new ramped entrance facing 10th Street will invite visitors to enter the café directly from 10th Street while allowing the café to serve the neighborhood even when the museum galleries are closed. The ramp features stainless steel panels, a glass railing, and stainless steel handrails in keeping with the entry language from the 2010 renovation work. The ramp wraps around an old oak tree, which predates the original construction of the building in 1969.

On the interior, the café will be expanded into the existing office space to the north restoring the dining room to its original size. A new coffee counter will face the entry and dining room, providing clear sight lines for customers and guests entering from 10th Street. The changes, while minor compared to the broad scale of the building, will be significant in activating the 10th Street side closest to BART and Laney College all in support of OMCA’s aim to be more than a museum and an even greater part of the Oakland community.

Upon its opening in 1969, the Oakland Museum of California (OMCA) was unique in its handling of a vast 7.7 acre site where every part of the building is usable and reflects a dual purpose that is at once both building and landscape, both museum and urban park. Originally designed by architect Kevin Roche and landscape architect Dan Kiley, the museum, devoted entirely to the art, history and natural science of California, is organized on three levels in an ascending stepped sequence where the roof of one becomes a terrace of the one above. Each level is accessed by an open central stairway that connects the museum’s multiple entries to its galleries.  While the conceptual vision of the building remains strong, there are nevertheless inherent functional challenges made evident by the growing needs of the museum.  In 1999, we began working with the OMCA in developing a detailed Space Needs Assessment and Program that culminated in a conceptual design and budget to address its evolving space and infrastructure requirements. This master plan was reviewed and approved by Kevin Roche and adopted by the museum for implementation in phases. The first phase of the project, the Daryl Lillie Art Education Center, which added children’s classrooms to the museum, was completed in 2001.

The second phase of the project involved the most complex elements of the Master Plan to include 94,000 SF of renovated Art and History gallery spaces and two new gallery additions at 5,200 SF of expanded exhibition space. The two new gallery enclosures can accommodate large scale art works and are each supported by a lightweight steel structure that lifts above the space to complement the all concrete existing building. Clerestory glass wraps each of the new galleries on three sides and allows diffused natural daylight to fill the space. Improvements were made in visitor circulation with clear points of entry and access to the museum.  A new stainless steel entry canopy extends out to Oak Street to make the main entrance more self-evident and inviting. Together with the new sky-lit canopies at the central stairway, covered circulation is now provided throughout the museum to further interconnect the galleries and visitor experience. Other improvements in this phase include a renovated 280-seat auditorium.

The third phase of the project includes the renovation of the Natural Science Gallery and enhancements for school groups at the Tenth Street entrance. OMCA received LEED gold certification for a major renovation. The fourth phase of work is ongoing.